The amazing Climatron geodesic biodome greenhouse is part of the Missouri Botanical Gardens in St. Louis. Two of the things that make this biodome’s main unique are that it was originally the first fully climate controlled geodesic greenhouse at a botanical garden and the worlds first geo-dome to be built using Plexiglass instead of glass. This was cutting edge tech at the time, however over the years problems  developed with the original Perspex panels and so they were replaced during a two year renovation that saw the whole dome redone with  2,500 panes of low E, tempered, insulating glass. 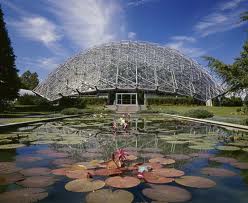 Twenty ten was the year the Climatron celebrated its 50th anniversary. The original  dome was finished in 1960, and showed off a huge range of biodiversity normally found in a lowland rain forest. The garden’s information shows that there are over 400 kinds of plants ranging from those found on volcanoes in Hawaii, through the Brazilian flood plains to as far away as India.

Another ingenious way the designers have made the hothouse more natural is by having banks of high powered lights that come on and off by timers to simulate different light conditions from high noon to a full moon. This not only keeps the plants happy but makes the Climatron an amazing place to visit for us humans!

Another technical achievement of the original geodome designer’s was the lack of interior partitions (one of the reasons I am so keen on 3v dome construction).  This means that the honeycomb shaped quarter-sphere dome is entirely free standing! So when you look at it from the outside and see this massive 175 feet wide structure soaring almost 80ft into the St. Louis sky it certainly gets your attention!  And being inside… well it takes your breath away!

The external support structure is made of aluminum tubes and rods. These structural elements either are “pushed together” or “pulled apart” to keep the frame from collapsing even in the most wild and crazy storms mother nature can throw at it. This is one of the most amazing things about the goedesic dome shape. Also apparently back in the disco years of the late 70’s this amazing biodome was widely considered to be high in the ranks of the most significant achievements in US architectural history.  When you tour the gardens next time you are there I am sure you will agree, though not quite as ambitious as the Eden Biodome complex in the UK, the Climatron is still wowing visitors 50 years after it was built.

This entry was posted in Geodesic Greenhouses Worldwide. Bookmark the permalink.