“Thinking further ahead though: The world’s largest Geodesic domes are, if I recall correctly, in Singapore and measure 38 meters tall from ground level. They use water as the primary temperature control mechanism, but I would be very curious to see what would happen if you had a giant dome like that that also goes as deep as it goes tall. Imagine, for example, a mile wide dome set into the side of a mountain. If you used waterfalls on the perimeter and had the water go down a bit below ground level that would help as an energy store drawing the heat of the into the water while reflecting light back at the plants for better illumination and would also act as a cold sink. The total area would be just under 22 and a half acres and you would have a height of around 250 feet. The waterfalls would help catalyze cloud formation and it would be tall enough for the tallest trees in the world to thrive. You could easily have entrances to housing between waterfall segments and at that far down there would be no heating or cooling issues. Variations in day length could be adjusted for with LED lighting in the dome itself powered by wind systems. How cool would it be to have a tropical forest anywhere you could find wind and sun? (italics mine)”

The whole idea of a geodesic cabin combo got me so excited I whipped one up!

Here it is please let me know what you think and share comments. 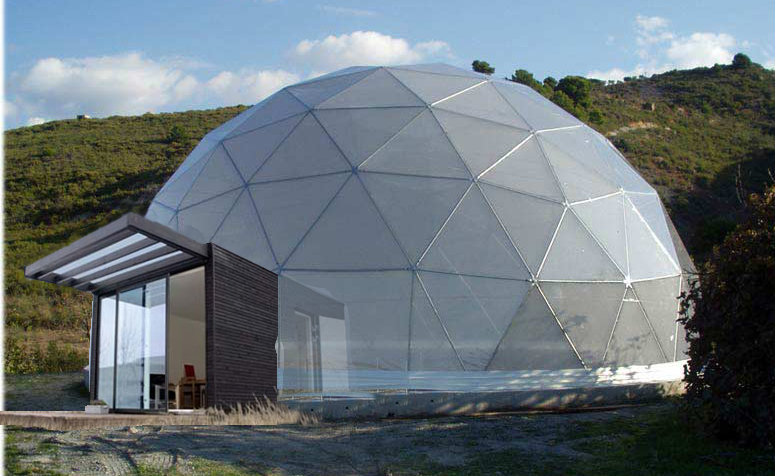 The crafty Swedes have done this even more aggressively by wrapping the whole house in a greenhouse. Cuts heating costs by 50% and gives way more flex space. I thought the geodesic biodome backyard had more punch though!