Do You Have to Build A Biodome Greenhouse to Grow All Year Long?

Do You Have to Have A Biodome Greenhouse to Grow Amazing Veggies and Flowers?

Well, when it comes to growing your own vegetables and flowers and you don’t have room for a biodome greenhouse there are other options!

Now of course, in a perfect world you would watch the free biodome construction and food collapse preparation training video, have the space, time and knowledge on how to build a biodome greenhouse for yourself. Then you wouldn’t need any of the other technologies that I will be talking about today. But… because many of you may live in urban areas and not have the space to build a geodesic greenhouse, no matter how much you might like to, there is another option. 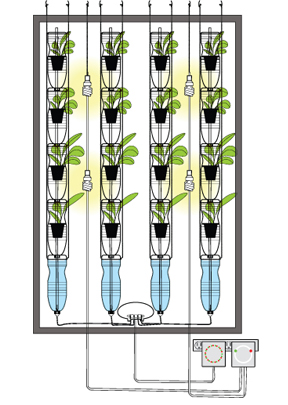 I heard about it for the first time on www.TED.com and it blew me away! So simple, so elegant and so community minded! What is this amazing urban greenhouse food growing system you might ask? Is it expensive? Do I need a lot of room? Well, read on and I will “spill the beans” on Window Farming.

Back in 2009 artist and technology designer Britta Riley started the first functioning window farm in a low-light Brooklyn apartment window after reading Michael Pollan’s New York Times’ Magazine article titled, “Why Bother?” in which Pollan suggests growing some of your own food to help heal “the split between what you think and what you do.”

After she had come up with a prototype and was harvesting fresh herbs and small veggies, even in winter, she set up a KickStarter pledge drive, raised $28,000 and went open source with the whole project. Now there is a vibrant community of window farmers in NY as well as many other urban centers around the world. With the projected urban population growing to 60% by 2030 the timing couldn’t have been better for the window farming project which turns the average urban window into a cheap, DIY urban greenhouse. 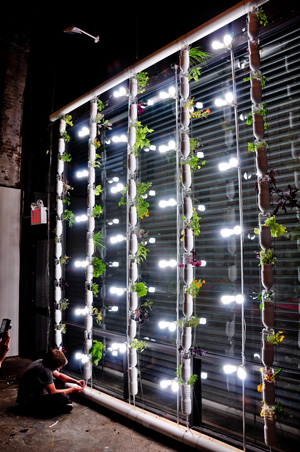 So, what can you do? Well, because Britta is a true humanitarian she has given all the research out for free! So all one has to do is go to www.WindowFarms.org and there you will find everything you need to start your own window farm and begin growing at least some of your own food.

Of course most people who end up here are similar to Amy and I and would really rather build a biodome greenhouse and have amazing fresh food all year round, but for those who want the food but don’t have the space check out Window Farming and you will be surprised at what you can grow right in your own windows! Even if you live in such a northern place as Oslo where they are successfully window farming with the addition of LED grow lights. So, even though you may really want to build a biodome greenhouse this is a way to get the results in much less time and space.

P.S. Don’t forget community gardening! Even in the city there are often places for a small geodesic greenhouse to be built, so don’t give up on the dream! You just might have to be a bit more creative, that’s all!

This entry was posted in Build a Greenhouse Cheap. Bookmark the permalink.